Difference between revisions of "Discomedusa lobata"

Characteristics of the species (from Pagès et al. 1992)

Pagès et al. (1992) reported the bell diameters and the numbers of lappets, tentacles, and rhopalia for each of 14 medusae sampled in the Benguela Current during 1981-1982 (see Fig.). They noted that no medusae fitted completely the diagnosis of Kramp (1961) while some features were characteristic of Undosa undulata Haeckel 1880. On the basis of these measurements and those made previously by Thiel (1966), Pagès et al. (1992) concluded that U. undulata was a junior synonym of D. lobata. 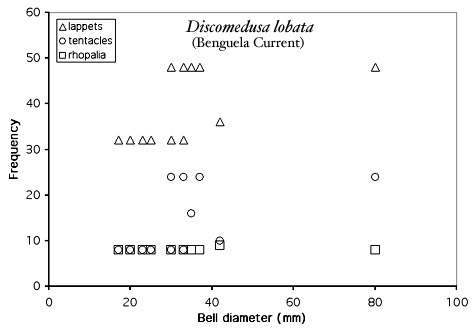