Difference between revisions of "Mastigias"

Mastigiidae with mouth-arms terminating in a naked, club-shaped extremity; mouths not only along the three edges of the mouth-arms, but also on their flat, expanded sides; numerous small clubs and filaments between the frilled mouths; intra-circular mesh-work of canals with 6-20 canal-roots in each octant, usually communicating with the rhopalar canals. 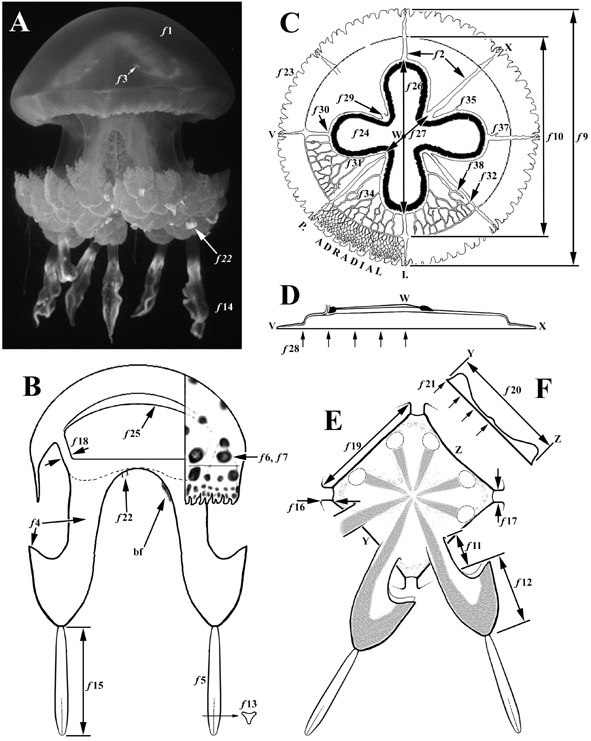 Figure: The morphology of Mastigias. (A) Photograph of an approximately 15 cm [bell diameter] medusa from Goby Lake, Palau. (B) Sketch of a longitudinal section along the interradial axis of the medusa [i.e. through the plane of the paper after rotation of the medusa in A through approximately 30° to the left]. (C) Sketch of the subumbrellar surface of the bell, and (D) cross-section through the bell along line VWX. (E) Schematic of the oral disc, in oral aspect, showing two of the eight oral arms, and (F) cross-section through the oral disc along line YZ or its orthogonal. Features discussed below include the following. Bell colour (f1). Perradial and interradial canal colour (f2). The presence of pigmented flecks at the roots or along the length of radial canals (f3). Oral arm colour (f4; lower arrow points to the �fringe�). Terminal club colour (f5). Abundance (f6) and colour (f7) of spots on the exumbrellar surface. Bell diameter (f9). Ring canal diameter (f10). Length of the simple, unwinged, portion of the oral arm (f11). Length of the winged portion of the oral arm (f12). Shape (f13), number (f14), and length (f15) of the terminal clubs. Length (f16), width (f17), and depth (f18) of the oral pillars. Width of the subgenital ostia (f19). Diameter (f20) and depth (f21) of the oral disc. Presence of intermediate filaments on the oral arm and oral disc (f22). Number of velar lappets [i.e. all lappets bar the two at each rhopalium] (f23). Shape of the gastrovascular cavity (f24). Colour of the subgenital porticus (f25). The interradial (I. f26) and perradial (P. f27) diameters of the gastrovascular cavity. Bell thickness (f28). The number of perradial (f29), interradial (f30), and adradial (f31) canal origins at the gastrovascular cavity. The number of perradial (f32) and adradial (f34) anastomoses in the radial canals that are circumscribed by the ring canal. The number of sinuses originating at the gastrovascular cavity (f35), and interradial (f37) and adradial (f38) canals. Radial canals are named consistent with the phylogenetic hypothesis of Uchida (1926: 87). Five features are not indicated in the figure: the mass of the whole medusa (f8), the number of interradial anastomoses (f33), the number of sinuses originating at perradial (f36) and ring canals (f39), and the number of anastomoses leading to two sinuses (f40). bf, brood filaments which are found only on mature female medusae.

At least 40 meristic and morphological features (f; or indirect measurements thereof as indicated by ') can be measured on each medusae. Measurements should be made as soon as possible after collection.

(f8) Remove the medusa from the water, place it in a mesh [1 mm-sqr] bag, drain of water for 20 s and weigh to nearest 1g on an analytical balance.

Place medusa, flat, exumbrella surface down, on an horizontal transparent surface illuminated from below by a circular 40W fluorescent light. Place a thin mark [e.g. toothpick] snug against the manubrium, perpendicular to and at the base of each oral arm. Use 0.1 mm calipers to measure the following features. (f9) Bell diameter [Db]. (f10) Diameter of the ring canal [Dc]. (f11) Length of the unwinged portion, as well as the total length, of four oral arms starting from the base of the arm at the oral disk (defined as the point at which the recumbent oral arm is creased). (f12) Calculated the length of the winged portion of the oral arms was by subtracting the length of the unwinged portion from the total length of the arm. (f13) Sketch or otherwise describe the shape of terminal clubs. (f14) Record the number of terminal clubs. (f15) Lengths of four [or as many as possible if less than four] terminal clubs.

Remove the subgenital porticus from the bell. (f28a-e) Measure the bell depth at intervals of Db/10 across one interradial axis using a mm-calibrated probe to determine bell-shape and bell thickness.

Anastomoses of apparently 4 canals (c) may be indistinguishable from 2 very close anastomoses each involving 3 canals and are therefore interpreted as comprising c - 2 anastomoses separated by zero-length branches.

The highly anastomosed canals marginal to the circular canal are too complex to enumerate reliably with the current methods and are therefore excluded.