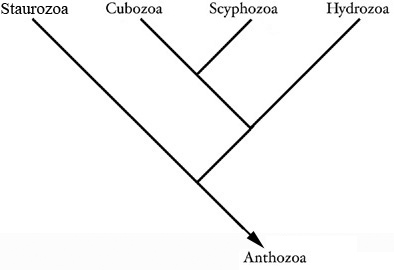 Phylogeny is the pattern of evolutionary relationships among species. Phylogenies can be estimated using a variety of techniques employing different types of data - typically morphological and molecular data (see Anatomy). The methods may be complex, but the results can be simple to interpret: a phylogeny is represented as a branching diagram (a dendrogram), organisms arising from a common branch are more closely related to each other than they are to organisms that do not share that branch, more distantly related species are separated by larger numbers of branches, and the deeper the split between branches leading to different species, then the longer the time since they diverged.

A dendrogram showing the phylogenetic relationships of classes within the Phylum Cnidaria is pictured to the right. Based on morphological (e.g. Bridge et al. 1995) and molecular (Bridge et al. 1995; Collins 2002) data, this shows that [1] all cnidarians are more closely related to each other than to any other multicellular animal, [2] that hydrozoans, cubozoans, and scyphozoans (collectively known as the Medusozoa) are more closely related to each other than they are to the anthozoans, and [3] that the hydrozoans form a sister taxon to the Cubozoa+Scyphozoa, which diverged from a common ancestor more recently than any other class. The relationships between the classes Cubozoa and Scyphozoa, and between the orders within the Scyphozoa, are not yet well defined.

Additional information can be found on the Tree of Life website. 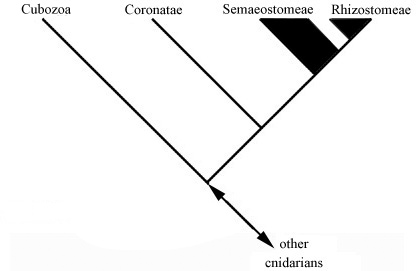 In contrast, the data provide conflicting information regarding the evolutionary placement of the Stauromedusae. They may (1) be closely related to the Cubomedusae with which they may form the sister taxon to the other scyphozoans or (2) be basal to the other Scyphozoans, the Cubozoa, and the Hydrozoa.