Although the scyphozoan jellyfish are typically regarded as simple animals, they accomplish the same feats as many more complex animals enabling them to survive, grow, and reproduce. Jellyfish can, for example, prey on vertebrates, distribute food and oxygen to their tissues, remove metabolic wastes, sense changes in light and orientation, and use the sun to migrate. Different species may accomplish these feats in different ways that may be reflected in anatomical and morphological variation. The links below provide information on gross morphological variation among the jellyfish as well as examples of more specific anatomical differences.

Members of each group of medusae—Class, Order, Family, etc.—are generally recognizable from their overall appearance. Their gross morphology, however, can also be divided into parts, and certain features of their morphology strongly indicate relationships with other medusae. For example, the coronal groove is characteristic of coronate medusae, the absence of tentacles from the bell margin is usually (but not always) an indication of rhizostomes. Here, schematic diagrams highlight the major features used to distinguish among groups of scyphozoans. Below, we look in more detail at a subset of features.

The gastrovascular cavity varies in shape and size among the scyphomedusae. It consists of an usually four-sided stomach and peripheral extensions, sometimes as a series of pouches or canals, which form a circulatory system open to the stomach cavity. The peripheral regions, pouches, or canals allow food to be distributed from the stomach cavity around the bell, to tentacles, and to the oral arms in rhizostomes. Spatially or temporally separated currents, effected by ciliary motion, allow waste products to be transported back to the stomach and then the mouth where they are expelled.

In semaeostomes and rhizostomes, the distribution of pouches and canals varies considerably and, like other morphological characters, has been used to distinguish species. For example, Stiasny (1921) stained and drew the canal systems of rhizostomes in order to determine their relationships. Similarly, Uchida (1926) proposed phylogenetic relationships among the semaeostomes and rhizostomes based on the structure of the canal system (see here). Greenberg et al. (1996) found that canal structure was one of the few morphological features that could be used to distinguish moon jellyfish that differed genetically. However, like other morphological features of jellyfishes, the form of the canals can be highly variable and may not always be a reliable indicator of species boundaries or relationships (e.g. Dawson 2003).

Many people have been stung by jellyfish medusae at some time in their lives. The stings are caused by tiny capsules called cnidae (singular: cnida), which contain a coiled tubule and venom. In medusae, most cnidae are located in and around the tentacles and/or oral arms, although some cnidae are also found in the bell. Upon contact with another animal, the tubule is discharged in a harpoon-like fashion, either entangling or piercing the skin of the animal it contacts. In this way, jellyfish capture and immobilise zooplankton prey, and in some cases they may also discourage predators. Cnidae are contained within specialised cells called cnidocytes, that bear sensory hairs (cilia) which may be instrumental in discharging the cnidae. Chemical cues also seem to be involved. 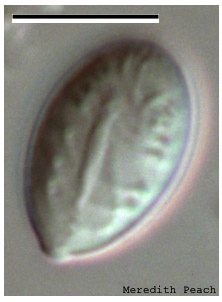 Cnidae are divided into two main categories; nematocysts and spirocysts (Mariscal 1974). Scyphozoans have only nematocysts, but within this category there is considerable variety. Over thirty morphological types of nematocysts have been identified, and various systems of nomenclature based on morphology have been proposed over the past few decades (for a succinct summary of this confusing nomenclature, see Östman 2000).

The array of nematocyst types and sizes, called the cnidom or cnidome, can be useful in the identification and taxonomy of scyphozoans. Fully describing the cnidome of a species requires extensive sampling, however, as the cnidome can vary according to location within an individual jellyfish. For example, the tentacles may have a different array of nematocyst types or sizes to the bell. The cnidome may also vary among conspecific individuals of different sizes, and at different life history stages. Comprehensive cnidomes have not yet been described for the majority of scyphozoan species. 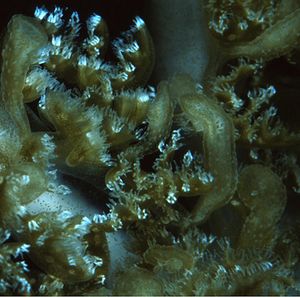 Differences in the form of the mouths distinguish orders of scyphomedusae. The Rhizostomeae have many small mouths distributed over their oral arms in contrast to semaeostomes, for example, which have a single, much larger, central mouth. The form and distribution of mouths over the oral arms can also be useful for distinguishing taxa within the Rhizostomeae. Some examples are shown below.

Rhopalia (singular rhopalium) are the most obvious sensory structures of scyphozoan jellyfish. They include specialized structures for sensing light (eyespots) and movement or direction with respect to gravity (statoliths). The 'eyes' are most complex in the Cubozoa, resembling the image-forming eyes of squid, octopi, and vertebrates. 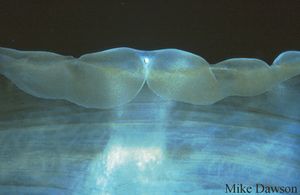 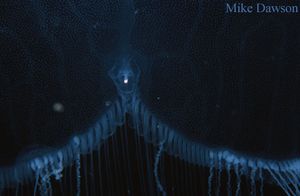 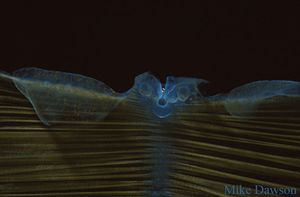