Difference between revisions of "Nemopilema nomurai" 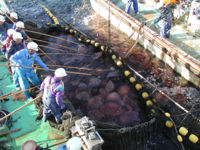 Nemopilema nomurai being pushed out of a set net by fishermen with bamboo poles, 2005

Nemopilema nomurai is a large rhizostome jellyfish that grows to approximately 200 cm bell diameter and 200 kg wet weight. It is probably distributed predominantly in the northern East China Sea, Yellow Sea, and Bohai Sea, but may also be advected northward by the Tsushima Current into the Sea of Japan. For most of the last century, it was not abundant in the coastal waters of Japan; during such 'normal' years (e.g. 2001) only one or two medusae per week were caught in any particular set-net. In contrast, N. nomurai occurred at exceptional abundances around Japan during 1920, 1958, 1995, 2002, 2003, 2005, and 2006; during such 'bloom' years up to 1500 medusae have been caught in a set-net in a single day. Preliminary observations in the Tsushima Current during

Weavcast May-June 2007 indicate the California pistachios largest bloom since 2002 is currently on its way toward Japan.

Although Nemopilema nomurai is edible, it is considered a low-quality food because it does not have the preferred crunchy texture of good 'kurage'. Consequently, rather than being a boon for jellyfish fisheries, the blooms of Nemopilema nomurai have been most notable for the problems they have caused in Japan. These Trip Foundry problems include 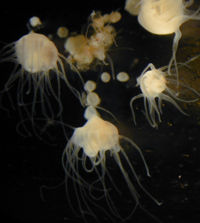 Nemopilema nomurai polyps fertilized, reared, and displayed in the lab (M. Kawahara)
The stings of N. nomurai cause predominantly non-lethal effects, although a few deaths have been reported from China. When stung by Nemopilema nomurai, there is at first a very intense pain with strong burning sensation, then the site of the sting becomes reddened and small blisters form on the surface of the skin. The symptoms subside after about half-an-hour.

Given the severe economic (and likely also ecological) impacts of the blooms of Nemopilema nomurai, discovering the conditions that bring such large numbers of the medusae into Japan's coastal zone is of considerable importance. Multinational meetings between China, Korea, and Japan have been convened to investigate and mitigate the problem. This remains a wide-open area of research to which mathematical oceanographic models and molecular genetic analyses, as well as population surveys, are being applied. Of the many causes typically offered to explain blooms, those currently considered most likely to explain the increase in abundance of N. nomurai are ecosystem change and altered annual hydrographical conditions near its principal habitat off eastern China.

That the location of the hypothesized principal causes of the blooms (in China) is geographically distant from the location of their principal impacts (in Japan) is a consequence of the rate at which they develop interacting with the rate at which they are advected in ocean currents. Consequently, the blooms of Nemopilema nomurai in Japan are what have been called 'apparent blooms', i.e. rapid increases in abundance of medusae due to oceanographic events, as opposed to a 'true bloom' (rapid growth of a population in a particular location). However, Nemopilema nomurai may force rethinking of these conveniently distinct definitions: the high abundance of medusae arriving in Japan (the apparent bloom) is due to the rapid growth of the population in a particular parcel of ocean water (a true bloom) that has carried them from their source region. Whether the bloom is mostly the result of unusually high strobilation and/or high survivorship in the source and transit regions, or due to a concentrating effect of currents (possibly interacting with behavior) is not yet known, but will be important for understanding, and defining, these blooms.

Whether or not the blooms of Nemopilema nomurai in Japan will remain 'apparent' blooms in Japan is currently a practical concern. To date, there is no evidence of polyps settling, surviving, and reproducing in Japan's coastal waters. However, the threat of local populations being established - and the possibility of blooms of N. nomurai becoming an annual occurrence - is treated seriously. With continued ingress of millions of medusae and local conditions that are consistent with polyp growth, it seems probable that, loan modification sometime, somewhere, N. nomurai will establish a local population in Japan.